Welcome to the Website for Seattleites and Washingtonians Who Love Poodles
Others are welcome to visit!

Seattle Poodles is no longer breeding puppies, but we do have poodle stud service available. We are a family who loves poodles and puppies. Our beautiful, AKC pedigreed, healthy, black & chocolate miniature poodles are members of our family and live in our home (and are very spoiled). Lady Espresso, who started our line, is a black miniature poodle (she carries a chocolate gene and had some chocolate puppies.) Her son Biscotti, daughters Bellaccino and Mochaccina, and grandson Rachmaninoff also had some chocolate puppies. Though Lady Espresso was spayed in 2008, her line continued on with some of her puppies (including son Sir Johann and grandson Sir Rachmaninoff in Colorado). We were fortunate to be able to meet Rachman's first litter in Colorado. One of the puppies from that litter went to my godson and nephew.

Home of the infamous "Coffee Poodles" 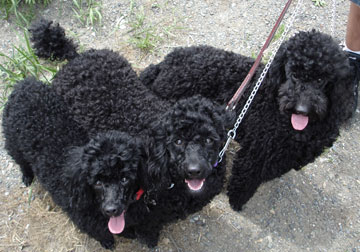 The coffee names started back in the early 80's when Val named her poodle "Cappuccino". He was a very light brown color with a white tummy and reminded Val of a Cappuccino. After meeting and marrying Bob, we added a beautiful black female poodle as a companion for Cappuccino (naming her "Val's Espresso." With their first litter of puppies the coffee names began. We moved to Angle Lake in 2001. After our beloved Espresso passed away at 15 years of age, we purchased an unrelated jet black puppy from a home breeder and named her "Lady Espresso of Angle Lake" and the coffee names continued. Mocha and Biscotti were from Spressi's first litter. Two puppies from her second litter were named "Macchiato" and "Frappuccino." 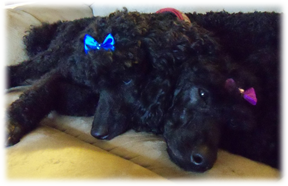 We retired Spressi after 4 litters, keeping two puppies from her last to continue her excellent line. Mochaccina and Bellaccino (fathered by a champion) completely stole our hearts. Both, now spayed and retired, were also excellent mommies.

We are no longer breeding, but stay in touch with our puppies and grandpuppies, often puppy-sitting them when their families go on vacation. Unfortunately we are not in touch with breeders and cannot give recommendations on where you can find a poodle puppy.